Sale on canvas prints! Use code ABCXYZ at checkout for a special discount!

How to Recreate a Civil War Era Photograph

A few years back I was at Fort Barrancas in Pensacola, Florida and took several photographs. I decided to attempt to turn a modern photograph of the fort into something that looks like it was taken around 1865. The blog (click on the More Information button) post will take you through the steps I took to achieve the effect I was looking for. Depending on the image you want to transform some of the steps may not be applicable.

This blog is to document the creation of my work entitled “B-17 Then And Now”.

It all started with my attending an air show at Niagara Fall, New York in 2007. A B-17 that that was used in the filming of the 1990 movie “Memphis Belle” was on display. Knowing that my Photoshop CS5 had the capability of stitching multiple images into a panorama, I took 5 overlapping shots of the bomber with people milling about in front of her... 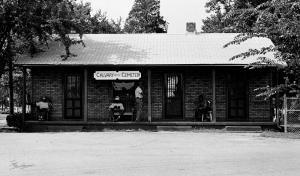 In the summer of 1971 I got a job cutting grass at Calvary Cemetery in Norfolk, Virginia. One day I brought my camera to work. Some of these photos have not been processed until recently. Click on the button below to read the entire blog post.